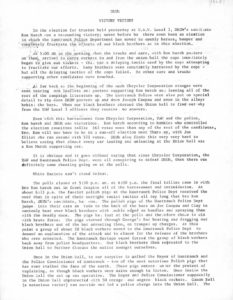 Leaflet distributed by DRUM announcing the election victory of DRUM member Ron March as a trustee of UAW Local #3 in 1968. After some internal debate, DRUM decided to run March for the trustee position in Local #3 in an effort to gain representation for Black workers within the UAW. March later lost in a run-off election, but the campaign provided many lessons for Black workers about the limitations of working within the union system to bring about change.