During the third night of the 1967 Rebellion, Detroit Police and the National Guard forcibly entered a room at the Algiers Motel, near the geographic center of the city. In the hotel were two white women and seven black men who took up residence at the hotel (which was popular for prostitution and drug use) to stay out of harm’s way during the rebellion. As police kicked in the door, they shot one black male teenager on sight. After killing the teen, police tortured other residents to solicit information about where the sniper was. Over the course of interrogation, the police murdered two more black men and terrorized the two white women viciously. No weapon was ever found.

Dan Aldridge and Lonnie Peek, both members of the CCAC, attended the pre-trial examination of the three white police officers and one security guard involved in the Algiers killings and described it as “just a game.” With legal advice from Attorney Milton Henry, Aldridge, Peek and Carl Slaughter began interviewing witnesses, taking pictures, and more generally just doing the job they believed prosecutors should have done. Following this work, and inspired by a speech given in Detroit by SNCC chairman H. Rap Brown, they decided to hold a people’s tribunal, which they modeled after a people’s tribune in Stockholm that year where the US was found guilty of atrocities in Vietnam.

“Dorothy [Dewberry Aldridge] and I brought Rap Brown to town,” Aldridge recalled. “He spoke at the Dexter Theatre on top of the roof. We complained that these boys had been killed by the police. So Rap says to me, ‘Hey, man, why don’t you have a tribunal? Educate the community.”

According to Aldridge, the tribunal was “an experience in political education for black people,” and an opportunity to “show the world that what it meant to be black in America.” “We are tired of black people being slaughtered and nothing being done about it. Since black people cannot get legal redress in the courts, it’s up to us to unify… forgetting silly differences, to demand justice and equal treatment.”

The People’s Tribunal took place six weeks after the rebellion on August 30, 1967. Over 3,000 people showed up for the tribunal at Rev. Cleage’s Central United Church of Christ, and more than 1,000 had to be turned away. Modeled after a formal trial, Milton Henry served as prosecutor while Ken Cockrel served as judge and moderator. Amongst the interracial group of jurors selected for the trial were nationally-renowned novelist John O. Killens, Detroit bookstore owner Ed Vaughn, Northern Student Movement organizer Frank Joyce, and civil rights icon Rosa Parks. According to historian Jeanne Theoharis, “Dan Aldridge had asked Parks to serve as juror because of her reputation in the community as a person of integrity, and she had agreed, saying that if she could be helpful she would come. Mrs. Parks’ willingness to take part in the Tribunal took great fortitude since she knew the family of Carl Cooper.”

Althea Watkins reported that the following reaction amongst blacks was typical. “It opened my eyes to a lot of things I did not know before. I think we should have more of them.” Cleage declared, “There is no way put down on paper the sheer horror of the recital of events by witness after witness” who described what happened at the Algiers Motel, one of the most brutal sites of police violence during the rebellion. Because blacks had long suffered this kind of terror in silence but were now willing to talk about it publicly, Cleage believed, “Horror remains but fear is gone.” “Thousands of people came together in testimony to this fearlessness and to this dedication. We are living in a new day, Detroit is a new city, and black people have a new spirit.”

As James and Grace Lee Boggs saw it, “what was new was the fact that so many black men and women who a few weeks ago would have been afraid even to use the word ‘black’ were now participating in a people’s tribunal. It was obvious fear had been driven from the hearts and minds of the black community in the July rebellion.” Similarly, Glanton Dowdell declared after the tribunal, “We are in a state of revolution,” that began during the rebellion when revolutionaries intervened to direct people’s energy. Thanks to this intervention and the organizing being done by organization like CCAC in the rebellion’s wake, Dowdell believed this rebellious energy amongst blacks was becoming united and revolutionary.

Clips from 2018 interviews with veteran Detroit activists Frank Joyce and Dan Aldridge, in which they discuss the People’s Tribunal of the police officers who killed three Black teenagers at the Algiers Motel during the 1967 Detroit Rebellion. –Videography: 248 Pencils 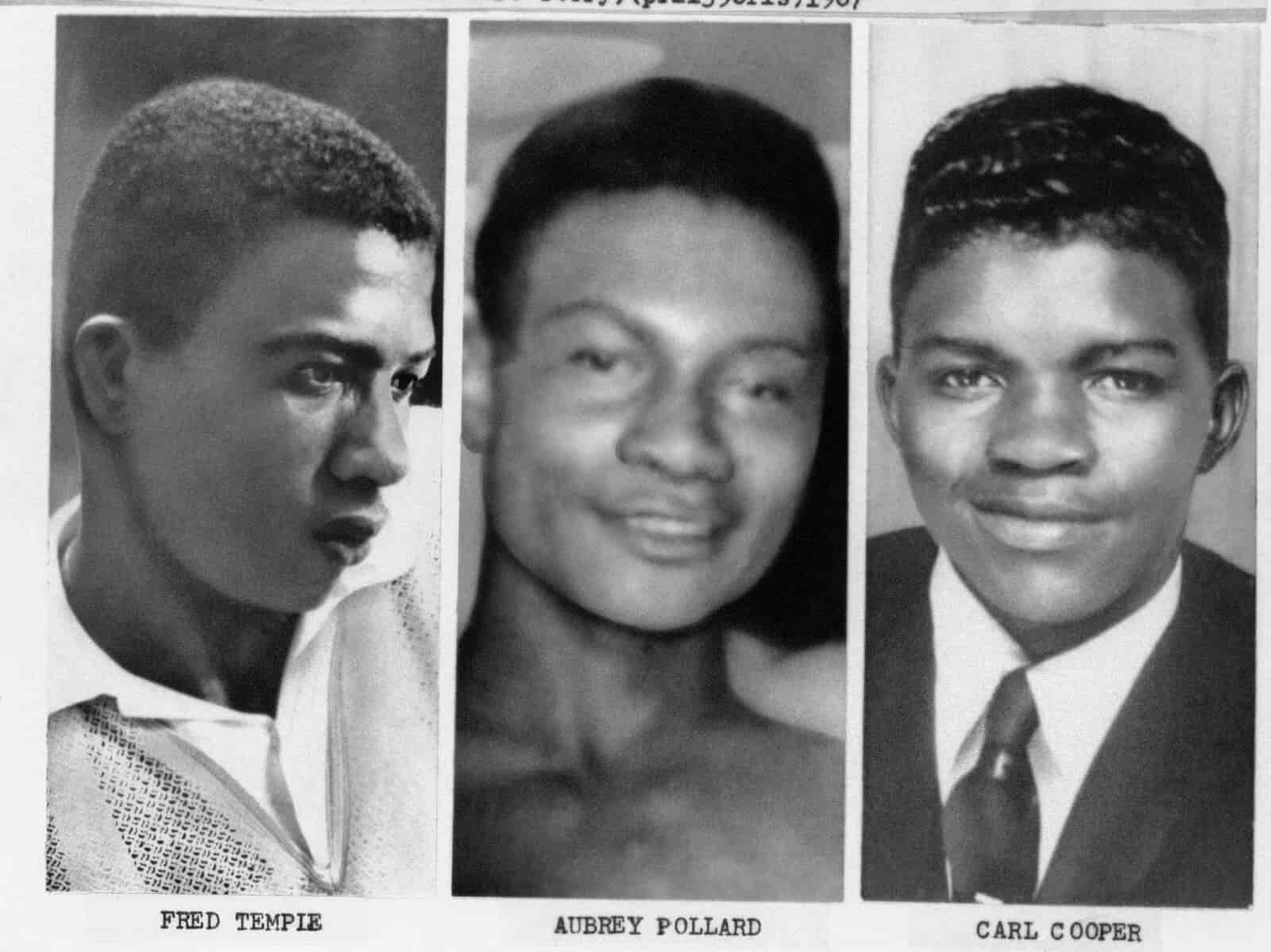 Victims of the Algiers Massacre 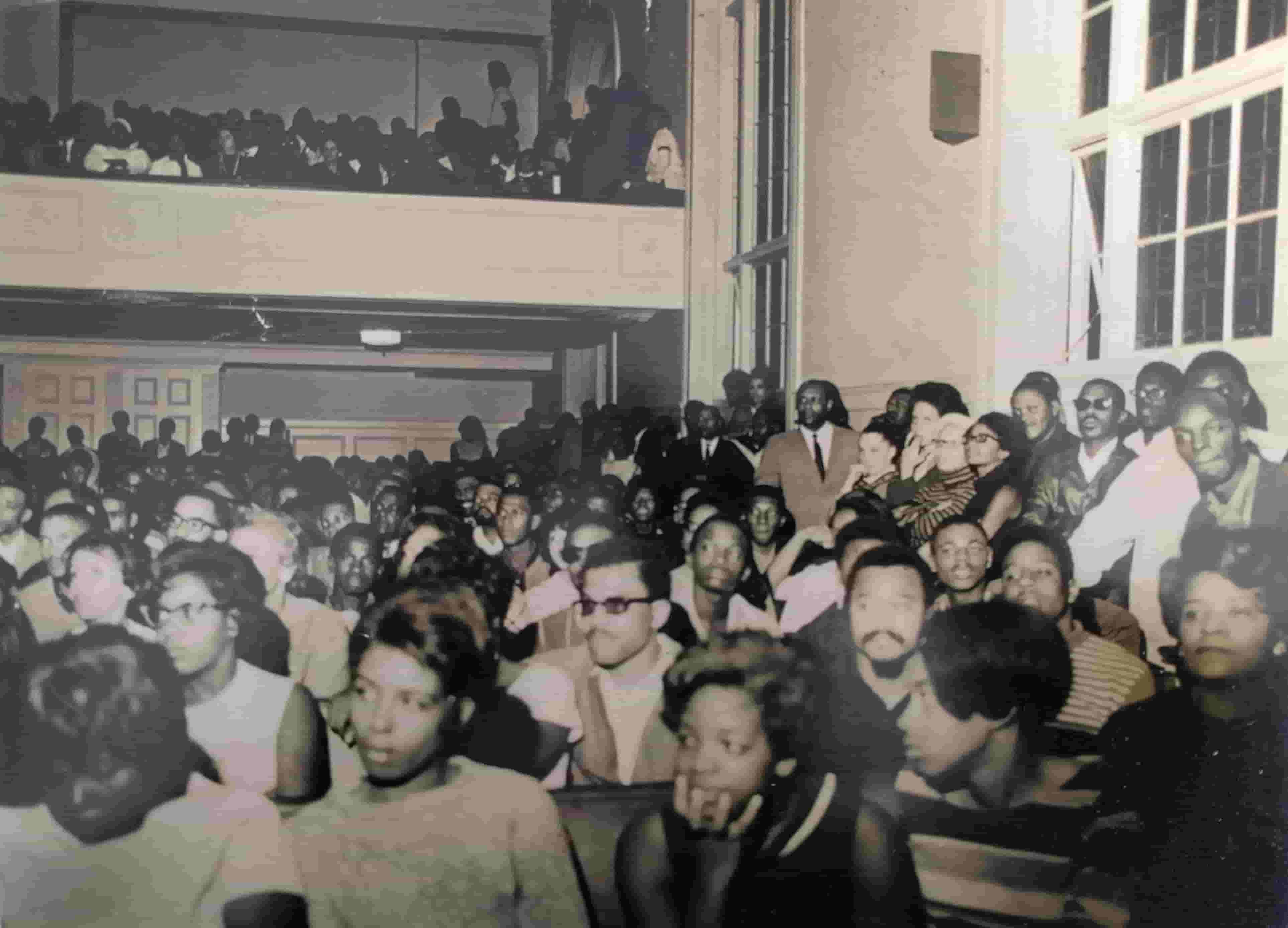 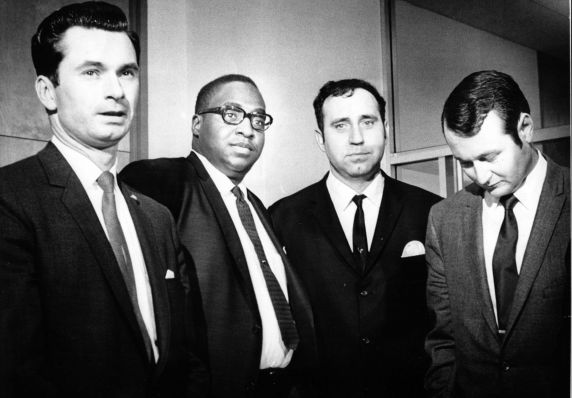 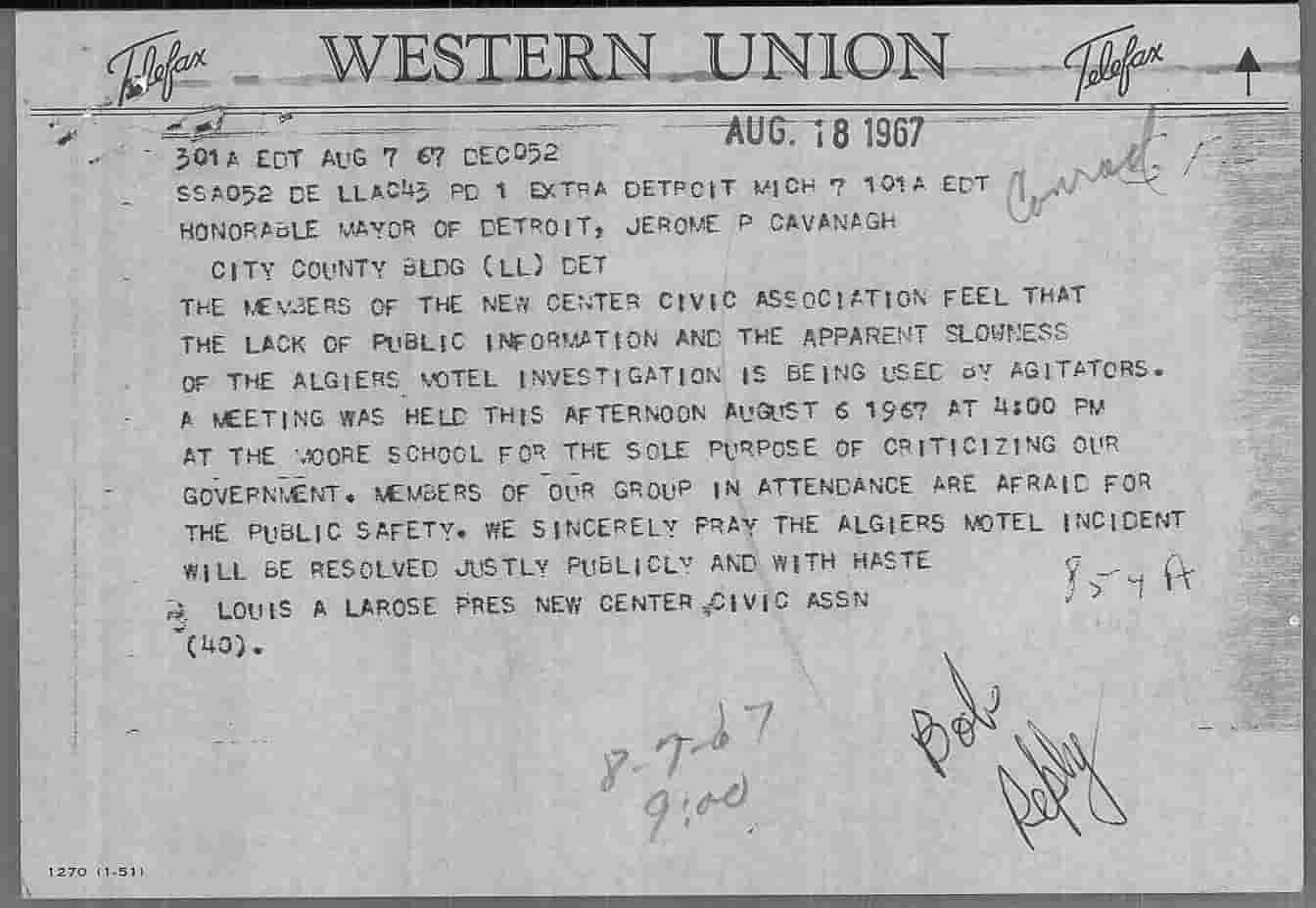 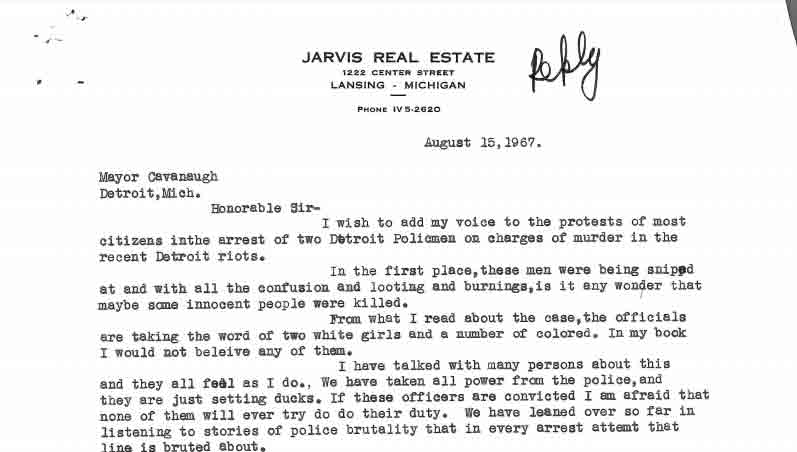 Letter from Bert Arnold to Mayor Jerome Cavanagh, August 15, 1967. In this letter expressing support for the police involved in the Algiers killings, Arnold illustrated many views about the 1967 Rebellion that were commonly held by white communities. Do you see any similarities in the ways that recent white commentators have responded to allegations of police brutality or urban uprisings? –Credit: Walter P. Reuther Library, Archives of Labor and Urban Affairs, Wayne State University

Letter from Marianne Peterhaus to Mayor Jerome Cavanagh, August 8, 1967. In this letter encouraging that the officers involved in the Algiers killings be brought to justice, Peterhaus expressed fear that continued injustice in the courts could lead to “another civil war.” How does the perspective of this writer compare to the other two in this section? –Credit: Walter P. Reuther Library, Archives of Labor and Urban Affairs, Wayne State University 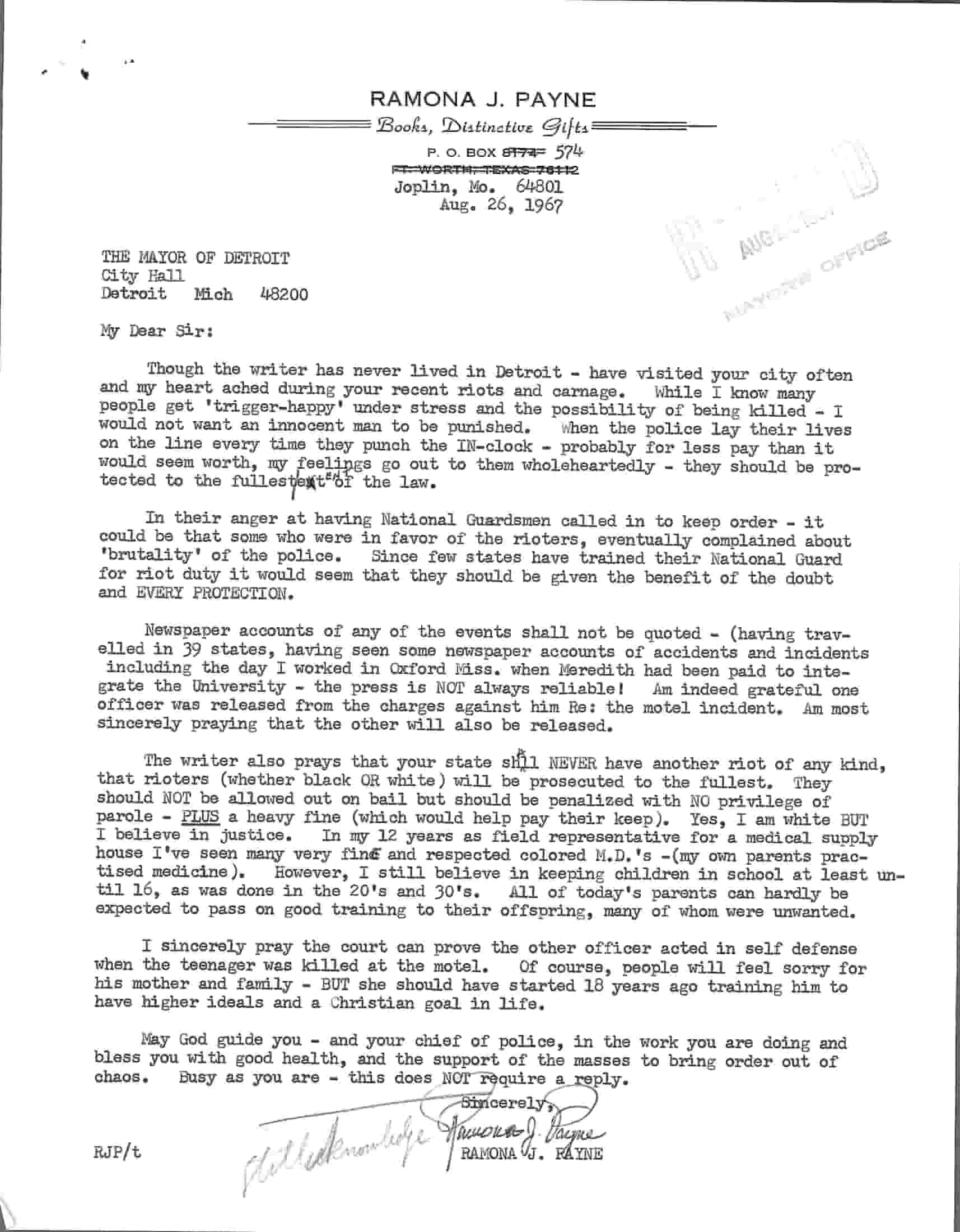 View Document
Letter from Ramona Payne to Mayor Jerome Cavanagh, August 26, 1967. In this letter of support for the Detroit Police Department and National Guard, Payne largely blames the victims of the Algiers Motel killings. What does the writer’s support for the police and characterization of civil rights protests tell you about their perception of the rebellion and its causes? –Credit: Walter P. Reuther Library, Archives of Labor and Urban Affairs, Wayne State University