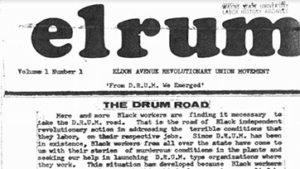 The first edition of the Eldon Avenue Revolutionary Union Movement’s (ELRUM) newsletter, produced in cooperation with the Inner City Voice. Emerging at one of Chrysler’s most important plants, ELRUM became of the most influential of the Revolutionary Union Movements. Can you spot the influence of Malcolm X on the political thought of ELRUM members from this newsletter?